It's been a long time, but Facebook doesn't give me enough room to really write!  I miss writing ... not enough to write another book ... but enough to get my blog going again!

Family is so important.  People ask me, "It's great that you all live near one another.  How did not happen?"  Well, it wasn't an accident, let me just say that!  From the time Laura was 12 years old she complained of Maryland winters.  She would say, "When I grow up, I'm going to live some place warm."  This was not a single complaint mind you.  This happened every winter.  I'd hear the familiar refrain many times throughout the cold, dark Maryland winters, something not easily forgotten.

So, when it came time for Laura to transfer to a four-year university, I said, "If you want to live some place warm, why don't you consider finishing your degree in a warm climate?"  Then I put on my thinking cap, "Hmmm, where would Jim and I like to live?"  He did his psychology internship in the mid '70's in Miami, but so much had changed there.  When we lived in Coconut Grove, it was filled with creative people who owned and operated the shops in the village ... instead of Banana Republic and Gap!

St. Pete's sense of community, affordable housing, arts and culture, and beautiful water has been a great choice for us.  We bought a home for Laura to live in while finishing her degree in Finance at USF.  The difference between out-of-state and in-state tuition nearly paid for the monthly mortgage payments.  We moved Painting with Fire to its location on Central Ave and David, our inventory specialist, came with it.  Laura graduated from college, she moved out of the house, we moved in!  It was like synchronized swimming, very well orchestrated, with God's hand moving us as if we were marionettes. Life is good!

A birthday celebration is all the sweeter when you're with family.  Jim graduated from his 66th birthday (which he called being "two-thirds evil") to 67.  His interest in music was re-emerging.  He figured out how to create a play list on Amazon through his Prime membership. :-)   Songs we grew up with by Creedence Clearwater, Gordon Lightfoot, Janis Joplin, Jimi Hendrix ... it was quite the mix.

Then the light bulb went on ... Jim used to love to play the mandolin.  When I first met him he serenaded me with Quicksilver Messenger Service's "Who Do You Love?"  I was impressed!

His mandolin was so tired looking and had a crack.  It was barely holding it together. David, our musician son, picked out a beautiful mandolin for his father.  Without any thought, Jim placed the mandolin here ...   Could it be a more perfect setting? 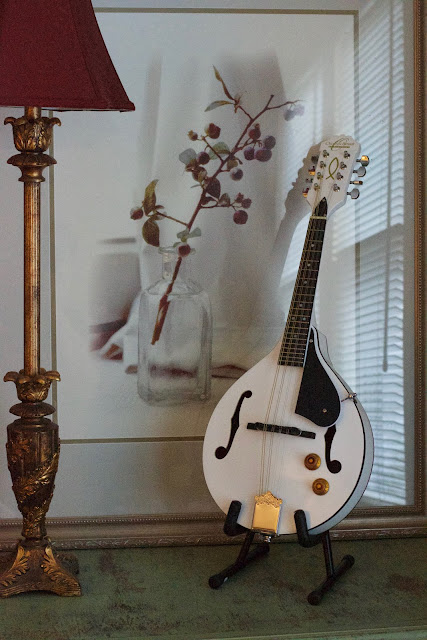 Laura and Matt, our daughter and son-in-law, Mr. and Mrs. Green Thumb, brought plants.  Here's the little vignette they created on the porch.  This is only a sample of what they've done in the yard since Father's Day! I feel as though they're landscaping the yard a little bit at a time! 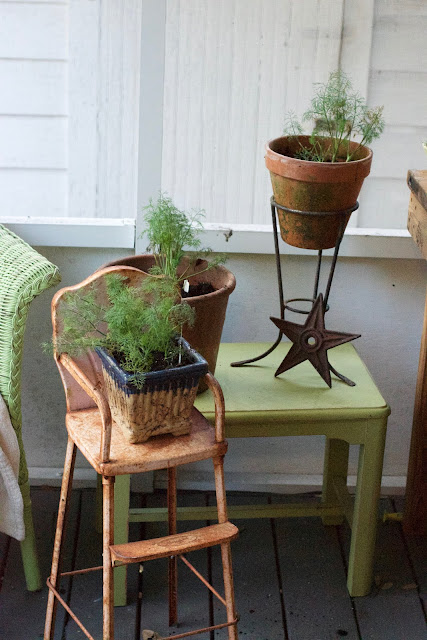 It was the perfect day.  I'm now babysitting the plants so they won't die in his brief absence. I'm really not a good babysitter!

I'd love to hear about special moments you share with  your family.